The Expanding Thermal Plasma (ETP) technique has been designed and patented in our group at the Eindhoven University of Technology [1]. The ETP setup is a remote plasma configuration and it consists of a high-pressure plasma source and a low-pressure chamber. The plasma source is a cascaded arc. The cascaded arc is a DC plasma source operated at high flows (tens of cm3/s STP at of non-depositing gases (Ar, Ar-H2, Ar-N2, H2, N2, etc.) leading to pressures of few tenths of bar, when the plasma is ignited. The discharge is sustained in a narrow plasma channel (diameter typically 3-4 mm, length 10 cm) between three cathodes and a grounded anode. The electrically insulated cascaded plates lead to a gradual potential drop. All parts are copper, except for the cathode tips (tungsten with 2% lanthanum), the PVC and boron nitride spacers between the cascaded plates, and the boron nitride cover of the cathode feed through. The discharge is ignited at 25-90 A with a corresponding operating voltage of 70-250 V, depending on the gas mixture used. The plasma in the arc is thermal with an electron density of ~1022 m-3 and with an electron and heavy particle temperature of both ~1 eV. The high heavy particle temperature leads to almost full dissociation of molecular gases when these are injected in the arc. The plasma emanates from the cascaded arc source through a nozzle and expands into the deposition chamber which is typically at a pressure of few tenths of mbar. Due to the large difference in pressure between the arc and the chamber, the plasma is accelerated leading to a supersonic expansion. At a few cm of distance from the arc outlet there is a stationary shock, after which the plasma expands subsonically in the deposition chamber. In the supersonic expansion and shock, the electron temperature is reduced to ~0.1-0.3 eV and the electron density to ~1017-1019 m-3 (in the absence of reactive gases in the chamber). In this plasma source reactive species (among which, Ar ions and electrons) drive the (deposition) precursor dissociation paths in the downstream region. The injected precursors are ionized via charge exchange reactions with the Ar ions, before dissociative recombination reactions with electrons lead to radical formation. Radicals are convectively transported towards the substrate where the deposition occurs on a temperature-controlled substrate, at high growth rates, i.e. up to several tens of nm/s. Because of the low electron temperature in the downstream region, the self-bias voltage at the substrate is less than 2 V, therefore the role of ion bombardment during film growth is negligible. 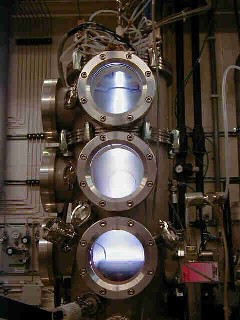